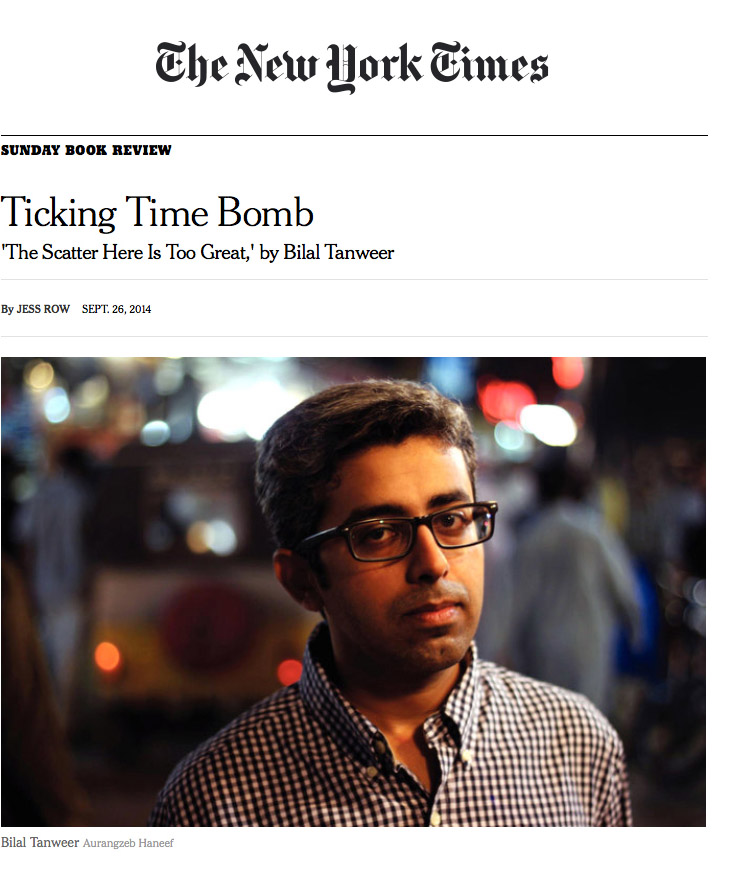 Among people who routinely deal with violence, pain, cruelty and injustice — ­domestic violence counselors, aid ­workers, paramedics, public defenders, immigrant advocates — there’s a phenomenon known as secondary trauma. It’s also sometimes called vicarious trauma, or empathic strain. In her book, “Trauma Stewardship,” Laura van Dernoot ­Lipsky, a former social worker, defines it as being unable to live with the knowledge that, despite our best efforts, most of the world’s suffering goes “unnoticed and unattended.” “Still,” she writes, “people who are working to help those who suffer . . . must somehow reconcile their own joy — the authentic wonder and delight in life — with the irrefutable fact of suffering in the world.”

Though Lipsky probably wouldn’t embrace the comparison, I want to take the risk of offense and say that this sentence applies almost equally well to many contemporary Pakistani novelists. Pakistan is a country where the fact of suffering is indeed irrefutable, whether we’re speaking of the horrific treatment of women and religious minorities, the use of terrorism — both insurgent and state-sponsored — as a tool of political strategy or simply the persistence of the most extreme poverty in a country that wastes billions on a state of perpetual war. From novelists in such a climate you might expect a response of escapism, or simply escape, but consider, for example, Mohsin Hamid, Mohammed Hanif, Nadeem Aslam, Kamila Shamsie: What unites these very different writers is a stubborn insistence on, in Lipsky’s words, the reconciliation of joy and suffering in the texture of everyday life.

Bilal Tanweer is another such stubborn Pakistani writer, and in “The Scatter Here Is Too Great” he takes the question of reconciliation head-on, as subject and as method. This is a collection of fragments — not quite short stories, not quite chapters — that assemble into a partial, and highly idiosyncratic, portrait of a bombing at a railway station in Karachi, told from the perspective of witnesses, victims, family members, friends, associates, lovers. The exact target and intent of the bombing, and the identity of the perpetrators, are not given, and although there are a few graphic descriptions of the horror of the event — “A man tears away from another burning car with a large scrap of metal sunk into the back of his shoulder. He’s screaming but his screams barely reach you” — the focus again and again shifts away from the scene of death to the daily struggles, fantasies and resentments of the living. Immersed in the story of a young boy whose older sister’s illicit boyfriend is a victim of the bombing — that is, three degrees removed from the actual event — we forget, temporarily, about the chaos and clamor and horror of Karachi and grieve instead for the three baby chicks given to the boy as presents, which he kills, unwittingly, and buries in a flowerpot.

Which is to say that the scatter, the sheer unwieldy particularity of life, actually is a little too great for the narrative conceit that Tanweer begins with. While it’s true that virtually every character in the book has some relation to every other, and thus has some tenuous relation to the bombing, “The Scatter Here Is Too Great” doesn’t draw these connections with any sense of urgency. What at first seems to be a book about primary trauma, about an event, is actually a deeply self-conscious work about what it means to write about violence, or write about Pakistan at all. In the book’s early pages, a visionary, half-mad poet, Comrade Sukhansaz — who is about to become one of the first victims of the bombing — recites aloud on a bus, over the mocking shouts of the other passengers: “The tussle of this believer with the other / is how to worship. After this, both are ignorant. / The brawl of this politician with the other / is how to gain power. After this, both are ignorant.” At the book’s conclusion, a young writer who has gone to the hospital in the aftermath, looking for his injured friend, gives up searching for him and wanders about the city, thinking about his own father, a writer of children’s stories: “In his stories the unfounded were found, the universe answered his questions, the past was visible and the future illuminated.” But the writer realizes his father “was wrong about the world. . . . We were all just broken parts and so were our stories. True stories are fragments. Anything longer is a lie.”

This is the voice of secondary trauma — the sense that the world’s suffering will always make a mockery of our attempts to measure it or describe it, let alone defeat it. “Living in this city,” the writer says, “you developed a certain relationship with violence and news of violence: You expected it, dreaded it . . . there was nothing you could do about it — not even grieve. . . . Grieving is possible only when you know you have come to an end, when there is nothing more to follow.” If there is a feeling of reconciliation in this book — which ends with the young writer experiencing his own momentary flight of mystical oneness — it’s not in the sense of arriving at a conclusion, either of a story or of an argument. The reconciliation has to do with the persistence of ordinary human life in an atmosphere of sedimented rage and omnipresent war. It’s not satisfying; nor is it meant to be. It’s just ­impossible to crush.

What makes Laura’s presentation vastly different from others is her use of storytelling and comic relief! She literally uses cartoons to illustrate examples of stress, anxiety, worry, concern, and then provides tools to help overcome these effects. Laura has the ability to transform her presentation to accommodate varying audiences, and because of this, I have recommended her as a speaker both on a state and federal level.

She is a skilled presenter who has empathy for the trauma an individual might face and the ability to provide skills to help that individual, all the while infusing her own joie de vivre!